Biotechnology - the tools of the trade

Adaptive Biotechnologies' 'Tools of the Trade' 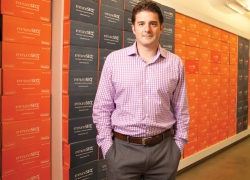 Tool Boxes. Adaptive Biotechnologies CEO Chad Robins in front of a wall of kits his clients use to submit patient samples for immune-system sequencing.

Many biotech startups are in a costly race to discover the next billion-dollar drug, but Seattle-based Adaptive Biotechnologies is taking a different approach to making money. If biotech is in the midst of a gold rush, says president and CEO Chad Robins, Adaptive is making the picks, shovels and other tools to help others uncover that gold. Adaptive, which received $105 million earlier this year — an unusually large amount for a small startup — sells diagnostic and monitoring tools that biotech researchers use to identify and develop new drug compounds. Adaptive’s products also allow health care providers to better assess a patient’s prognosis and develop appropriate treatment plans.

Adaptive began in 2009 as a spinoff of the Fred Hutchinson Cancer Research Center. Harlan Robins, a computational biologist, sat down for lunch with two colleagues, Chris Carlson, a molecular biologist, and Edus Warren, a clinical immunologist. The three soon understood that Harlan Robins’ expertise with new high-throughput genomic sequencing technology could help researchers understand a patient’s immune response on a molecular level. Their work then drew interest from colleagues, and the researchers received a flood of requests for their services for sequencing immune systems. They quickly realized the technology had to be commercialized if it was to have an impact.

Ricardo Cavalcanti- Tools of the Trade

Tools of the Trade: Eureka tents

Tools of the Trade: Nick Watney

Tools of the Trade: Rory McIlroy

Tools of the Trade: Kyle Stanley

Tools of the Trade Pt4